So awesome! We finally went to our first dog dancing lesson in Hatvan city, where the lovely Anikó Juhász & her dog, Izzy were waiting for us.

We (me and my aussie, Meredith) were going together with my friend, Lidi and her border collie, Luna. On the way we were so exited as we could not wait what would happen, how it would be. But before the first the quest was to find the place. :) Hatvan is not too far away from us, but none of us were familiar with the city and the city centre. :) We were told it was in the centre, but by car it was not that easy, but fortunatelly we had the GPS :) It told us to drive always into smaller and smaller streets, but finally we found it. :) Yeeeeeeaaaah!

We arrived in her grooming saloon (she is a collage of me:) ), where Anikó welcomed us really nicely. She is such a lovely person! Her awesome dog is not a big fun of play with other dogs, so Meredith & Luna played sooo lovely togerther. Of course when You take out Your phone to make a video, they were already stopped it ;)

So first lesson, You have to make a decission: HTM or Freestyle?

HTM - Heelwork to Music: here if I remember correctly, You have 18 positions from what You have to do at least 75%. This is closer work with Your dog, but with less tricks!

For more Dog Dancing details and regulations, you have to look at Your kennelclub's site!

Freestyle - here everything is about Your imagination and it has many tricks in it! But not only tricks and performance, it has to be a dance or a story!

Because both of us did not know anything about dog dancing, Anikó showed us videos what were the differences. To tell the truth, I did not see too much differences, when I first saw these videos (FUNNY when You have a better look, it is sooo sooooo different ;) ). Actually at this moment I was already lost, lost in the beautiful connections between the handlers/dancers and their dogs!

So we got homework: we should decide which one to choose!

Of corse, we worked with the dogs as well. The first steps: it is not needed to perform difficult tricks or moves, but the important is to put them together, nicely with music!

Firstly, it was Lidi's turn with Luna BC. She is already 4 years, so she can perform quite lots of things: they made slalom connected with spins, and kukucs (the dog is walking between Your legs! - I have to google what is the english name for it ;) )

They where sooo awesome already :)

Than it was our turn: OMG! Meredith was only 6 months, we could do nearly nothing! But we tried slalom: I had yummy treats in my left and right hands too help her where to go :) and to cross under my legs. After some steps, according the advice of Anikó, I tried to ask Meredith to walk surround my left leg! And to put it nicely together! :)

Important notice was that, our hand movements had to be nicely too, and Your head should be more up as well, and Your body too...

Guessing we have a lot of homework ;)

HTM or Freestyle? Come back next time to our blog, and see, what have we chosen! :)

On TV at Balatoni Nyár 😍 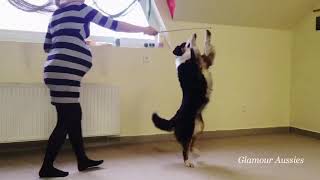 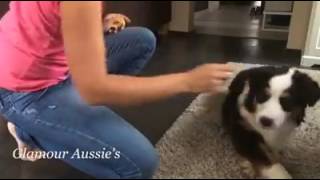